The Catalyst Television Festival, previously ITVFest, is coming to Duluth! For those of you unfamiliar with this festival, it is a film festival geared more towards episodics (think TV shows or podcasts ) rather than standalone films. Catalyst is one of the few film festivals that accept this nature of work. Catalyst prides itself on being accessible to smaller, “big” cities, such as Duluth. The festival started in Los Angeles in 2016, remained there for six years, then moved to Vermont. This is the first time it’s coming to Duluth. If you don’t have the means or the connections to travel to a big city just to showcase or strengthen your work, Catalyst may be just the thing for you.

Catalyst caters not only to filmmakers and other industry professionals; it’s a huge draw for film fans as well. The screenings, panels, seminars, and speakers are created to appeal to all kinds of industry folks; patrons of the arts, general public, first-time creators, major executives, and Emmy winners are all people who have attended the festival in the past.

The festival is happening from October 9-13 2019. Although the festival is held at many locations throughout downtown Duluth, our very own NorShor Theatre is lucky enough to house some of their events!

The first part of the festival to be held at our NorShor Theatre is on October 10 from 11am to 6pm. We will be hosting events such as screenings, panels, workshops, seminars, keynote speakers, and a marketplace. Our involvement extends through October 11 and 12 as well, where the same type of events will be going on from 11am to 6pm. The majority of events at the NorShor are new film screenings, some with Q&As afterward. 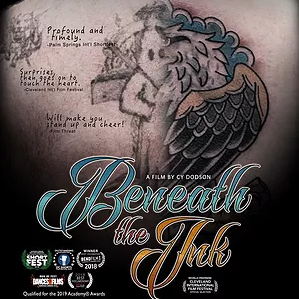 Beneath the Ink poster

The first event we host is a screening of a documentary called Beneath the Ink by Jeffrey T. Larson. Beneath the Ink is a timely look at hate and racism in the western foothills of the Appalachian region that reveals heartfelt stories of change and redemption. This screening runs in our theatre on October 10th from 11am to 12:15pm.

Another event at our theatre is showing on October 11th from 3:05pm to 4:15pm. This screening is called Comedy 14 with Q&A. This short film follows three awkward, adolescent “losers” who are kicked out of their respective friend groups and team up to survive the harsh, dramatic world of middle school in the new millennium.

The NorShor is also lucky enough to house the ceremony for the Catalyst Lifetime Achievement Award as well as the keynote speaker Nancy Cartwright. Nancy Cartwright is an actress and voice actor best known the world over as Bart Simpson. She has numerous additional “hats” as a producer, philanthropist, community leader, volunteer, and author. This event happens at our theatre October 12th from 4:30pm to 6pm.

Feel free to join us at the Catalyst Film Festival!

To find out about more events happening during the Catalyst Television Festival, see the complete schedule here. Want to know more about Catalyst or the festival itself? Learn more here!

We hope to see you there!