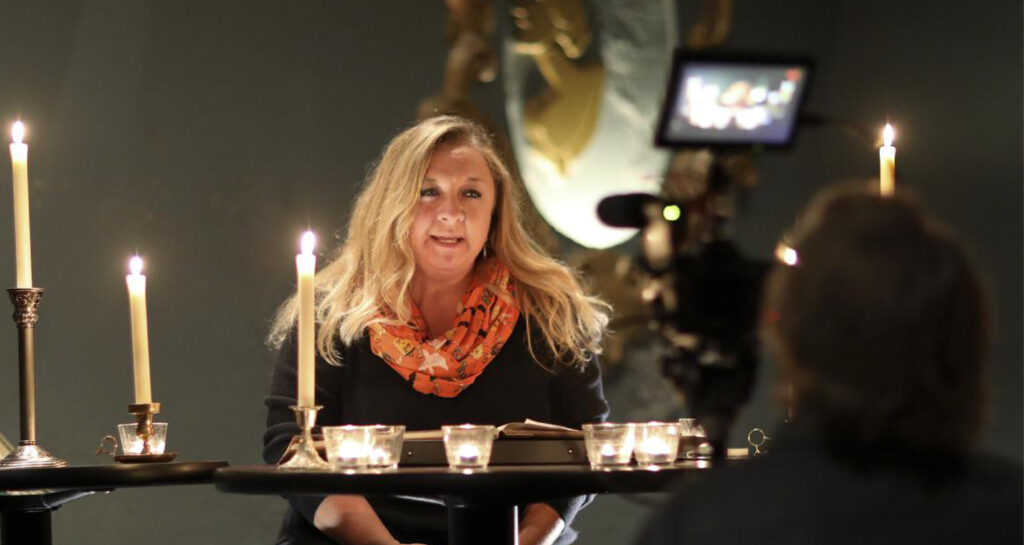 This review originally appeared in the Duluth News Tribune on October 30, 2020, and was written by Sheryl Jensen. Photo by Steve Kuchera (skuchera@duluthnews.com).

A completely blackened theater, late at night, can be one of the scariest of places to be alone. Having been in many myself, I can attest to their eeriness and the powers of the imagination to create all sorts of ghostly visions and unearthly sounds.

A ghost light is a single-bulbed light pole left on in the middle of the stage so those who are the last in the theater do not fall into the orchestra pit or trip over an errant prop. Some believe that the ghost light is left on for the theater’s apparitions, who can then perform in their shadowy glow.

The Duluth Playhouse, for its first performance since the pandemic began, premiered a virtual production of Tales from the Ghost Light, a collection of spooky tales filmed at the NorShor Theatre, said to have its own ghostly inhabitants.

The eclectic mix of stories was adapted and performed by single actors who could rehearse and perform without having to share the stage with other performers. Some of the stories were original; a few were adapted from the likes of Edgar Allan Poe and Washington Irving.

While the concept was a good one, the show was at times uneven with some of the stories lacking in enough tension, fear or horror.

Watch this all-new production presented by The Duluth Playhouse now through 11:59pm (Central) on November 1 on:

While this Halloween special is available to be enjoyed for free from the comfort of your own home, we hope you’ll consider making a donation to help support our programming during COVID-19 and our staff as we work to reopen our stages.